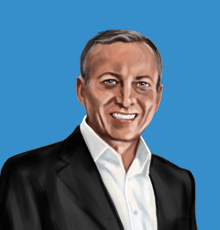 John believes the measure of an agency's success is how much commercial benefit it brings its clients.

A writer and creative director at leading London agencies, John then formed an agency with Chris in the mid 90s.

With clients such as Virgin Atlantic and BT, it quickly developed a reputation for fresh, commercially successful creativity.

He repositioned the £100m group as an integrated agency incorporating one of Europe's first digital divisions.

John has a number of creative awards and has been a D&AD copywriting jury member.

He is a mentor for the London Youth Support Trust, which helps young creative entrepreneurs from disadvantaged backgrounds start and build their businesses.

John is also a songwriter and musician.